Grow in Peace reminds us that as we choose to rest in the sovereignty of God, we are bathed in peace, for we know God is faithful.

END_OF_DOCUMENT_TOKEN_TO_BE_REPLACED

The Winding Road reminds us that when the road gets hard or storms loom up ahead, we can simply rest in the Everlasting Arms. God is our strength, our stronghold, our protector, and the lifter of our heads. So continue on with joy as you rest in the shadow of His wings.

END_OF_DOCUMENT_TOKEN_TO_BE_REPLACED

The name of this collection is Quiet Confidence. It is comprised of a combination of Dyed4you Art images, the words of which are shared below as well as the download He shared concerning their combined meaning. The images included in this collection are:

END_OF_DOCUMENT_TOKEN_TO_BE_REPLACED

Prepare for Rain reminds us that the fulfillment of God’s promises is just ahead and moving in fast. It is time to make ready and stand in faith to see the desert bloom.

END_OF_DOCUMENT_TOKEN_TO_BE_REPLACED

Faithful Victory reminds us to seek counsel from God, to walk it out in complete obedience, and to stay firmly rooted in faith as we praise God through the process. As we stay in rhythm with His cadence, He is faithful to manifest the victories.

END_OF_DOCUMENT_TOKEN_TO_BE_REPLACED

Forever Bloom reminds us to be “Son-flowers,” and to rejoice in the reign of our King.

END_OF_DOCUMENT_TOKEN_TO_BE_REPLACED

Emboldened by the Sustaining Source

END_OF_DOCUMENT_TOKEN_TO_BE_REPLACED

Currents of His Love {Air}

Currents of His Love {Air} represents our joyous surrender to the flow of His Spirit and the endless possibilities that surrender brings.

END_OF_DOCUMENT_TOKEN_TO_BE_REPLACED

Look Ahead reminds us to keep our hearts set on what God has in store for us. Regardless of how long it takes for His promises to manifest, He is faithful and true. So though they may seem to tarry, and sometimes we may not understand His ways, still we know His promises come forth in His perfect timing and His perfect way. So we choose to wait and trust in Him.

END_OF_DOCUMENT_TOKEN_TO_BE_REPLACED

Blooming Faith reminds of the importance of persisting in the face of trails, knowing that the Father has not forgotten us but is cultivating and increasing our faith in the process.

END_OF_DOCUMENT_TOKEN_TO_BE_REPLACED

Firm Foundation reminds us that the Word has been since the establishing of the earth and will remain far beyond the breaking of its foundations.

END_OF_DOCUMENT_TOKEN_TO_BE_REPLACED

Blessed Beyond a Curse

Blessed Beyond a Curse depicts a zealous one, standing in worship and intercession in the deepest of nights surrounded by reminders of His promises and knowing without a doubt that joy comes in the morning.

END_OF_DOCUMENT_TOKEN_TO_BE_REPLACED

Heir of Promise embodies the light and life we feel as we stand fast in the warmth of His love, covered in the protection of His promises, knowing He is fully faithful.

END_OF_DOCUMENT_TOKEN_TO_BE_REPLACED

Joyful Warrior depicts the relentless one strengthened by the One who will never leave or forsake Whose joy is our strength.

END_OF_DOCUMENT_TOKEN_TO_BE_REPLACED 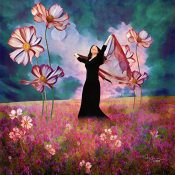 Dreaming and Rejoicing represents a joyful exploration of the inner landscape within the heart of this worshipper as she dreams with God and life, beauty, and worship abound.

“I’m thanking you, God, from a full heart, I’m writing the book on your wonders. I’m whistling, laughing, and jumping for joy; I’m singing your song, High God.” Psalm 9:1-2 (MSG)

“God can do anything, you know—far more than you could ever imagine or guess or request in your wildest dreams! He does it not by pushing us around but by working within us, his Spirit deeply and gently within us.” Ephesians 3:20 (MSG)

“What a beautiful home, God-of-the-Angel-Armies! I’ve always longed to live in a place like this, Always dreamed of a room in your house, where I could sing for joy to God-alive!” Psalm 84:1-2 (MSG)

END_OF_DOCUMENT_TOKEN_TO_BE_REPLACED

Angels Take Flight reminds us of the supernatural impact of our worship. We serve a God who delights in using the foolish things to confound the wise, so as we press in with abandoned joy and zealous passion heaven and earth align.

Psalm 22:3 (NLV) Yet You are holy. The praises Israel gives You are Your throne.

Suspended above the living creatures was something like a broad expanse; it had an awesome gleam like a crystal ceiling and stretched wide over them. Beneath the expanse, the creatures stretched out their wings toward each other, and each creature had another pair of wings it used to cover both sides of its body. Whenever the creatures moved, I heard the violent fluttering of their wings, like roaring rapids, like the voice of God Almighty, like the sound of an army besieging a city. Whenever the creatures stopped, they lowered their wings to their sides. As they stood silent, with their wings lowered, a thunderous voice sounded high above the expanse over their heads.

And above that expanse over their heads was something that looked like a throne made of sapphire. Sitting on that throne high above the earth was a humanlike figure. From his waist up, I saw what looked to be glowing metal surrounded by an all-encompassing fire. Below his waist, I looked and saw something like a blazing fire. A glorious radiance was all around Him. The glorious radiance resembled a rainbow that lights up the clouds on a rainy day. This was nothing less than the glory of the Eternal that appeared to me. When I saw the vision of the Eternal and His glory, I fell upon my face and heard a voice speaking to me.

END_OF_DOCUMENT_TOKEN_TO_BE_REPLACED

Persistent Fruit represents a worshipper – who regardless of adverse environments – continues to press in, gaze fixed on the Kingdom of God, and bears fruit that abides.

John 15:16 (AMPC) You have not chosen Me, but I have chosen you and I have appointed you [I have planted you], that you might go and bear fruit and keep on bearing, and that your fruit may be lasting [that it may remain, abide], so that whatever you ask the Father in My Name [as presenting all that I Am], He may give it to you.

END_OF_DOCUMENT_TOKEN_TO_BE_REPLACED

Faithful and True depicts a worshipper raising her banner declaring her confident faith in the Promises of the One who is faithful.

Revelation 19:11 (VOICE) I looked up and saw that heaven had opened. Suddenly, a white horse appeared. Its rider is called Faithful and True, and with righteousness He exercises judgment and wages war.

Revelation 19:11 (AMPC) After that I saw heaven opened, and behold, a white horse [appeared]! The One Who was riding it is called Faithful (Trustworthy, Loyal, Incorruptible, Steady) and True, and He passes judgment and wages war in righteousness (holiness, justice, and uprightness).

Numbers 23:19 (GW) God is not like people. He tells no lies. He is not like humans. He doesn’t change his mind. When he says something, he does it. When he makes a promise, he keeps it.

END_OF_DOCUMENT_TOKEN_TO_BE_REPLACED

God of Wonders depicts a worshipper transfixed in adoration of the One who is worthy of all praise.

Psalm 40:5 (NASB) Many, O Lord my God, are the wonders which You have done, And Your thoughts toward us; There is none to compare with You. If I would declare and speak of them, They would be too numerous to count.

Psalm 40:5 (CJB) How much you have done, Adonai my God! Your wonders and your thoughts toward us — none can compare with you! I would proclaim them, I would speak about them; but there’s too much to tell!

END_OF_DOCUMENT_TOKEN_TO_BE_REPLACED

Rohi (Our Shepherd) represents the rest and complete trust we have when under the Good Shepherd’s care. We can enjoy our surroundings with joy and curiosity knowing we are in His care.

“O Shepherd of Israel who leads Israel like a flock; O God enthroned above the Guardian Angels, bend down your ear and listen as I plead. Display your power and radiant glory. Let Ephraim, Benjamin, and Manasseh see you rouse yourself and use your mighty power to rescue us. Turn us again to yourself, O God. Look down on us in joy and love; only then shall we be saved.” Psalm 80:1-3 (TLB)

END_OF_DOCUMENT_TOKEN_TO_BE_REPLACED

“The one who builds stairs up to heaven and sets their foundation on the earth, the one who calls for the water in the sea and pours it over the face of the earth— His name is Yahweh.” Amos 9:6 (NOG)

“You were in Eden, the garden of God; your clothing was bejeweled with every precious stone—ruby, topaz, diamond, chrysolite, onyx, jasper, sapphire, carbuncle, and emerald—all in beautiful settings of finest gold. They were given to you on the day you were created.” Ezekiel 28:13 (TLB)

“All streams flow into the sea, but the sea is never full. The water goes back to the place where the streams began in order to start flowing again.” Ecclesiastes 1:7 (NOG)

END_OF_DOCUMENT_TOKEN_TO_BE_REPLACED

The Visitation represents a heavenly ambassador visiting us in this realm – a messenger from the Lord; angelic visitation.

“The angel of the Lord [angelic spokesperson for God, sometimes identified with the Lord himself] came and sat down under the oak tree at Ophrah that belonged to Joash, one of the Abiezrite people… Gideon, Joash’s son, was separating some wheat from the chaff [threshing/beating out wheat] in a winepress to keep the wheat from the Midianites [in a pit hidden from sight]. The angel of the Lord appeared to Gideon and said, “The Lord is with you, mighty [courageous] warrior!””Judges 6:11-12 (EXB)

“Do not neglect to show hospitality to strangers, for thereby some have entertained angels unawares.” Hebrews 13:2 (ESV)

END_OF_DOCUMENT_TOKEN_TO_BE_REPLACED

Spirit Blow depicts the flow of the Spirit – moving like a wind, His breath swirling around us, guiding us to a place to cross over to heavenly realms – a portal. His light marking the way.

“Then He said to me, “Prophesy to the Ruach. Prophesy, son of man, and say to the Ruach, thus says Adonai Elohim: ‘Come from the four winds, Ruach! Breathe upon these slain, that they may live.”” Ezekiel 37:9 (TLV)

“Now He drew close enough to each of them that they could feel His breath. He breathed on them:
Jesus: Welcome the Holy Spirit of the living God. You now have the mantle of God’s forgiveness. As you go, you are able to share the life-giving power to forgive sins, or to withhold forgiveness.” John 20:22-23 (VOICE)

END_OF_DOCUMENT_TOKEN_TO_BE_REPLACED

Joy Comes in the Morning

Joy Comes in the Morning is the reminder of the promise of the coming dawn, and it captures the glorious feel that fresh day full of possibilities brings.

END_OF_DOCUMENT_TOKEN_TO_BE_REPLACED

Find Images By: Other Identifiers