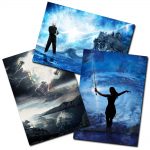 Testimonies are always fun, but I love that this one demonstrates something that I think most of us struggle with, when we make plans and then God messes with those plans. 🙂

I wanted to share with you something I found funny. I guess it is kind of my ‘scarf’ story but it was a gift for someone else. If she ever sends her story in I would be interested to see how it works out. So here is the story….

There was an art piece that was released and I immediately thought of a friend of mine. It was called Anointed for War: Knight Light. I thought of my friend Ron who was a Krav Maga ministry and is a very anointed warrior, physically and spiritually. But I couldn’t send a piece to him without sending one to his wife also. Yiska is his compliment and ‘help meet’ in every way and just as anointed in battle and dance. I started a conversation with you, Meghan, about created a sister piece for Knight Light, so they could have a set, a pair. But you can’t rush God, He creates when He is ready. I was patient. I forgot about it for a long time, no worrying, just keeping it in the back of my mind. Something reminded me of it a good 9 months after Knight Light was created, and I decided it was time. Around the beginning of December, Channukah season, I decided to send Ron and Yiska a set anyway. I pulled up the Dyed4you Art gallery and pulled up all of the images that reminded me of them. I whittled it down and had it narrowed to 5. I talked to my husband, telling him about the original piece I wanted to send (Knight Light), eventually we decided on three art pieces. One for Ron (Destroying Strongholds), one for Yiska (Worship Warfare) and one for them both (Gibbor: Mighty One), none of which was the original piece (Anointed for War: Knight Light). The one thing I did notice was that all three of the art pieces had lightning in it. The funny part of this story is that the sister piece for Knight Light came out less than a month after I sent Ron and Yiska their art. It is called Anointed for War: Rallied Warriors. Did I make a mistake? Should I have waited longer? I don’t think so. Should I send them the set now that there are two, like I had originally intended? I don’t think so either. I like to believe that God had a reason for having me send the art pieces that I did; a reason for prompting me to gift them at the exact time that I did, and even a reason He didn’t release the other image until after I had sent them. I hope to hear the other half of this story. Maybe I will tell her about the other images someday. Maybe I will still gift them at some point. But for now I am satisfied with being a faithful servant to the Good Father who loves His children.

And the proof is in the pudding – her friends were very blessed by the Dyed4you Art they received! They shared their appreciation online:

…This is so encouraging to us!!…

Introducing: Holy is His Name