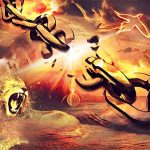 A while back we created a chain-breaking  commissioned proprietary art piece as branding for a ministry (Free Soul). Many have been blessed by the message behind the imagery, but because it’s proprietary, we’re able to share it for viewing but not sell it, which has brought some disappointment. I’d considered making another chain-breaking piece several times over the years, but never felt the nudge from Papa to do so.

One day I began sensing a stirring to create such a piece and the next day, someone called to commission a non-proprietary piece along these lines. Beautiful confirmation since God had already began speaking to me about it! Thus Bondage Breaker: the Sword was born (there is a Bondage Breaker: the Shield in progress btw, and in fact this is actually a derivative of that piece), we pray it blesses you!

Read the full word for Bondage Breaker: the Sword

Prophetic “Portrait” with a 2nd Surprise