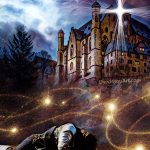 Fun story around our newest release’s creation! Not Defeated was created one evening, and I confess I was a bit surprised because it’s what I think of as “man art” and typically that’s not my style – LOL – but I liked it and had a strong sense of the word. The next morning I documented the outline of the word and a little bit later someone called wanted to order art as a gift for a man and immediately I knew this piece had been created in advance for just this purpose! The word was given and was such an encouragement. Friends confirmed it was right on. God is so awesome 🙂

Hoping it will be a blessing to others as well!

Read the full word for Not Defeated

What is a Prophetic Word?