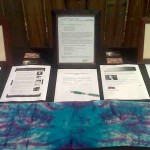 The young adults ministry Remnant at my church was having a silent auction the first weekend in August. We had it during our church’s annual BBQ & Rib Fest. The money raised was to help us continue outreach to our community, to college campuses here in Columbus, and to help with our website. I knew I wanted to ask Meghan to prayerfully consider a donation, and she was very gracious to do so! Now, admittedly, this silent auction was brought up last minute and left only a little under 2 weeks to “campaign” for donations.

The Lord led Meghan to donate generously to us the Beloved Series, the Warrior Series, and an 11×60 scarf of “Deeper Waters”. I decided to frame the printcards in 8×10 frames with a matte to show them off even more and to protect them from all the BBQ sauce fingers 😉 I also framed the scarf letter as well. It was such a BEAUTIFUL display and God’s anointing truly was resting on these pieces. The day of the auction, we quickly realized we needed a table just for the Dyed4you Art & Dyed4you scarf and then one for everything else, lol! 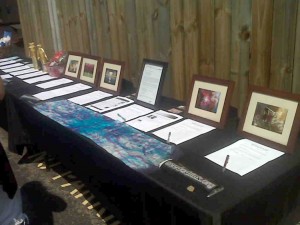 The Dyed4you table was a BIG success! Even though I had printed out the description and meaning for each art piece, there were still many questions and it gave us the opportunity to minister to people in many ways through the art pieces and scarf. It was amazing to see how the Lord was moving on people just by them looking at the pieces. They would tell us how each it was moving on their heart, stirring their spirit, and “washing over them”. 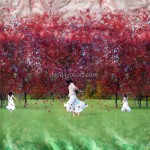 People were bidding left and right and the bid price was reaching some high prices (“Locked Garden” ended at $45 just to give you an idea of how high it was going). When time was up and the winners of the items were to be announced, it actually hurt my heart to see some of the people who had not won the piece they wanted that had moved them so much. There were 3 ladies in particular that the pieces they wanted I actually had at home and the Lord spoke to me to give them my pieces. One of my pastors had lost a bid on a Warrior Series picture and it really spoke to him. 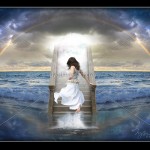 One woman stood in front of “Stairway to Revelation” through most of the afternoon. She didn’t say too much in the beginning, but I could see her holding back tears. She later told me that one of her daughters had passed away two years ago and that the girl in the picture looked like her. She also said that her husband had passed away just 3 weeks earlier.

“Stairway to Revelation” just spoke to her how her daughter and husband were both running to the Lord & resting now in His presence in heaven. She wanted the picture to set next to one of her daughter & her husband together that she has next to her bed. It just seemed like the perfect reminder of where they are now, Who they are with, and one day she too will run to the arms of her Father. She was truly heartbroken to not win the piece and it broke my heart. I asked her to meet me at the church welcome center the next morning. At that time, I gave her mine and prayed for her. It was such a blessing to me to see her blessed my the Lord through Dyed4you Art which is dear to me. 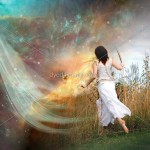 The second woman wanted “Come Away”. Everything in her could feel the Lord calling and wooing her and sweeping her into deeper intimacy with Him. Again, the bid price was skyrocketing and she wasn’t able to afford it. She held it a few times and could see herself in the field running to her Husband. So, the next morning at church, I did as the Lord instructed and blessed her with mine. She cried and held it close to her. She has it in her room and it reminds her that Jesus is constantly wooing her and inviting her into a sweeping romance with Him.

The third woman wanted “Locked Garden”. She felt the wind in her hair, the grass under her feet, and could smell the fragrance of His presence all around her when she looked at the piece. The scripture the piece is based on was confirmation for things the Lord had been speaking to her. The same thing that happened to the other 2 women happened to her. But the next morning, she was overwhelmed when I placed the art print in her hands. She says that she feels the Lord’s presence oozing from it and at times continues to smell the fragrance. 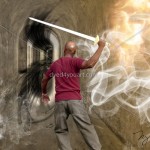 My pastor received “Reclaiming the Heart” not long after the auction as a blessing. It confirmed a word that had been spoken over him and also what the Lord has been speaking to him in his prayer closet. He has it hanging in his prayer closet reminding him of the word spoken. 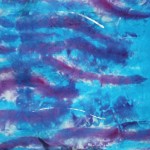 The woman who won the scarf “Deeper Waters” I know well and the word that went with it was complete confirmation of her calling. She wears it all the time at church and keeps it with her. She absolutely loves the colors!

I also want to say that Meghan’s donation made up 80% of our profit from the silent auction. The Lord blessed us through her so mightily and I thank God that Meghan has a heart to serve, bless, and give the way she does!

Where is the US in Bible Prophecy?